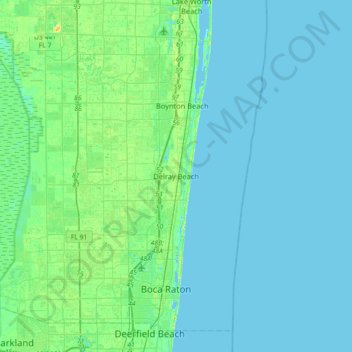 Delray Beach has hot and humid summers. High summertime temperatures range from 87-93 °F with low temperatures around 75-78 °F. Winters are warm, with a marked drier season. Typical wintertime high temperatures are typically in the range of 74-83 °F and low temperatures 57-65 °F. However, when occasional cold fronts hit South Florida, daytime high temperatures may only reach the low or mid 60s (°F). Overnight lows during these brief periods can sink into the mid 40s. These cold fronts do not typically last more than a day or two and only occur several times each winter. Its near sea-level elevation, coastal location, position just above the Tropic of Cancer, and proximity to the Gulf Stream shapes its climate. Hurricane season officially runs from June 1 through November 30, although hurricanes can develop outside those dates. The most likely time for hurricane activity is during the peak of the Cape Verde season, which is mid-August through the end of September. Delray Beach has received direct or near direct hits from hurricanes in 1903, 1906, 1928, 1947, 1949, 1964, 1965, 1979, 1992, 1999, 2004, and 2005.