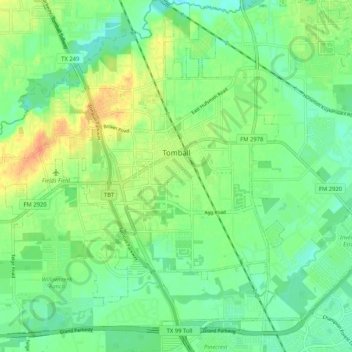 Settlement began in the Tomball area in the early 19th century, where settlers found an open, fertile land that received adequate rainfall—perfect conditions for farming and raising cattle. It was on a land granted in 1838 to William Hurd's heirs. In 1906 the area began to boom. Railroad line engineers often noticed that the Tomball area was on the boundary between the low hills of Texas and the flat coastal plains of the Gulf, making it an ideal location for a train stop. The railroad could load more cargo on each car, because the topography gently sloped toward the Galveston ports and provided an easier downhill coast. Thomas Henry Ball, an attorney for the Trinity and Brazos Valley Railroad, convinced the railroad to run the line right through downtown Tomball. Soon after, people came in droves to this new train stop. Hotels, boarding houses, saloons, and mercantile stores all began to spring up in the area. At first, people called the area Peck, after a chief civil engineer of the railroad line. However, on December 2, 1907, the town was officially named Tom Ball, later to be shortened to one word, for Mr. Ball.[8][9]