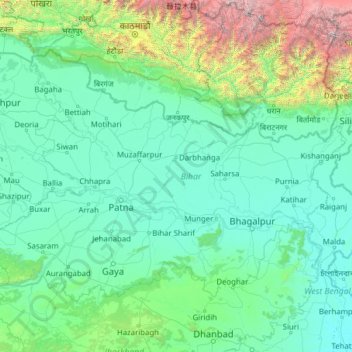 Bihar covers a total area of 94,163 km2 (36,357 sq mi), with an average elevation above sea level of 173 feet (53 m). It is land locked by Nepal in the north, Jharkhand in the south West Bengal in the east and Uttar Pradesh to the west. It has three parts on the basis of physical and structural conditions: the Southern Plateau, the Shivalik Region, and Bihar's Gangetic Plain. Furthermore, the vast stretch of fertile Bihar Plain is divided by the Ganges River into two unequal parts – North Bihar and South Bihar. The Ganges flows west–east and, along with its tributaries, regularly floods parts of the Bihar plain. The main northern tributaries are the Gandak and Koshi, which originate in the Nepalese Himalayas, and the Bagmati, which originates in the Kathmandu Valley. Other tributaries are the Son, Budhi Gandak, Chandan, Orhani and Phalgu. Bihar has some small hills, such as the Rajgir hills in center, Kaimur Range in south-west and Shivalik Range in North. Bihar has notified forest area of 6,764.14 km2, which is 7.1 percent of its geographical area. The sub-Himalayan foothills of Shivalik ranges, primary Someshwar and Dun mountain, in West Champaran district are clad in a belt of moist deciduous forest. As well as trees, this consists of scrub, grass and reeds.