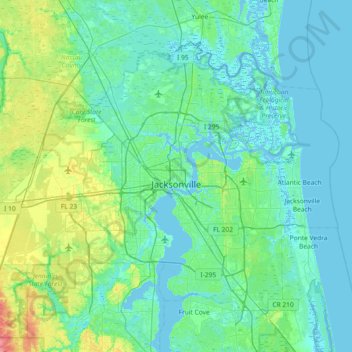 Just south of Jacksonville and north of Saint Augustine is the boundary of where the Floridian Peninsula ends and Continental North America begins; Jacksonville is north of that line. While still in the North American Coastal plain, the topography begins to take on slight Piedmont characteristics. Like the Central Florida ridge and the Piedmont, the area begins sloping several miles inland. On the west side of Jacksonville, a series of low ridges predominate. The high point of Jacksonville rises to 190 feet above sea level on Trail Ridge, along the boundary with Baker County. This high point was developed into a landfill and leveled in the 1990s. Prior to that the ridge reached over 200 feet. Strip mining in the west side of Jacksonville has leveled the area.