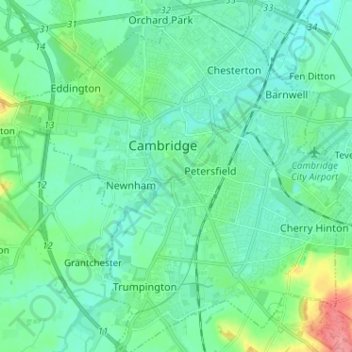 The city, like most of the UK, has a maritime climate highly influenced by the Gulf Stream. Located in the driest region of Britain, Cambridge's rainfall averages around 570 mm (22.44 in) per year, around half the national average, with some years occasionally falling into the semi-arid (under 500 mm (19.69 in) of rain per year) category. The last time this occurred was in 2011 with 380.4 mm (14.98 in) of rain at the Botanic Garden and 347.2 mm (13.67 in) at the NIAB site. Conversely, 2012 was the wettest year on record, with 812.7 mm (32.00 in) reported. Snowfall accumulations are usually small, in part because of Cambridge's low elevation, and low precipitation tendency during transitional snow events.