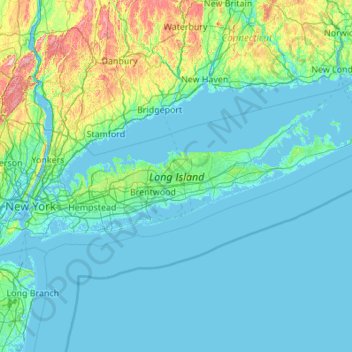 The land to the south of this moraine to the South Shore is the outwash plain of the last glacier. One part of the outwash plain was known as the Hempstead Plains, and this land contained one of the few natural prairies to exist east of the Appalachian Mountains. The glaciers melted and receded to the north, resulting in the difference between the topography of the North Shore beaches and the South Shore beaches. The North Shore beaches are rocky from the remaining glacial debris, while the South Shore's are crisp, clear, outwash sand. Jayne's Hill, at 401 feet (122 m), within Suffolk County near its border with Nassau County, is the highest hill along either moraine; another well-known summit is Bald Hill in Brookhaven Town, not far from its geographical center at Middle Island. The glaciers also formed Lake Ronkonkoma in Suffolk County and Lake Success in Nassau County, each a deep kettle lake.