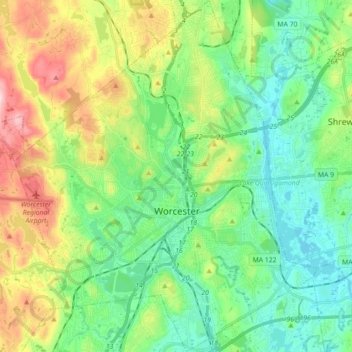 Worcester is known for being particularly snowy in the cold months, sometimes even experiencing autumn blizzards. The city averages 48.1 inches (1,220 mm) of precipitation a year, as well as an average of 72.9 inches (185 cm) of snowfall a season, receiving far more snow than coastal locations less than 40 miles (64 km) away.[citation needed] Massachusetts' geographic location, jutting out into the North Atlantic, as well as Worcester's elevation relative to the surrounding terrain, makes the city very prone to Nor'easter weather systems that can dump heavy snow on the region. Extreme winters have brought up to 120 inches of snowfall, as happened in 2005. In late January 2015, a blizzard traversed over the city as it shed almost 32 inches of snow. This was the highest single-day snowfall total for anywhere in Massachusetts since data began being collected in 1892.[citation needed]