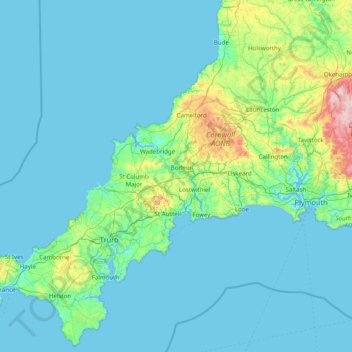 The interior of the county consists of a roughly east–west spine of infertile and exposed upland, with a series of granite intrusions, such as Bodmin Moor, which contains the highest land within Cornwall. From east to west, and with approximately descending altitude, these are Bodmin Moor, Hensbarrow north of St Austell, Carnmenellis to the south of Camborne, and the Penwith or Land's End peninsula. These intrusions are the central part of the granite outcrops that form the exposed parts of the Cornubian batholith of south-west Britain, which also includes Dartmoor to the east in Devon and the Isles of Scilly to the west, the latter now being partially submerged.