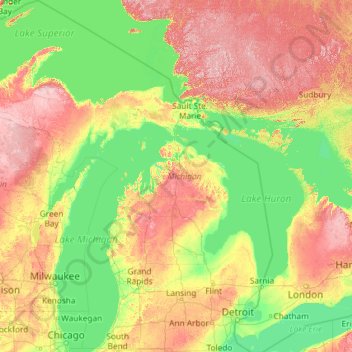 The heavily forested Upper Peninsula is relatively mountainous in the west. The Porcupine Mountains, which are part of one of the oldest mountain chains in the world, rise to an altitude of almost 2,000 feet (610 m) above sea level and form the watershed between the streams flowing into Lake Superior and Lake Michigan. The surface on either side of this range is rugged. The state's highest point, in the Huron Mountains northwest of Marquette, is Mount Arvon at 1,979 feet (603 m). The peninsula is as large as Connecticut, Delaware, Massachusetts, and Rhode Island combined but has fewer than 330,000 inhabitants. They are sometimes called "Yoopers" (from "U.P.'ers"), and their speech (the "Yooper dialect") has been heavily influenced by the numerous Scandinavian and Canadian immigrants who settled the area during the lumbering and mining boom of the late 19th century.