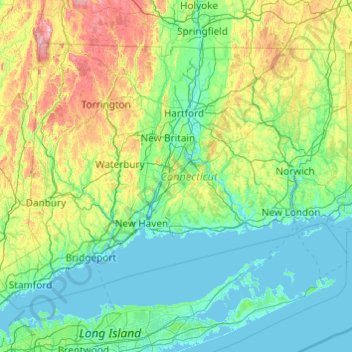 Winters (December through mid-March) are generally cold from south to north in Connecticut. The coldest month (January) has average high temperatures ranging from 38 °F (3 °C) in the coastal lowlands to 33 °F (1 °C) in the inland and northern portions on the state. The lowest temperature recorded in Connecticut is −32 °F (−36 °C) which has been observed twice: in Falls Village on February 16, 1943, and in Coventry on January 22, 1961. The average yearly snowfall ranges from about 60 inches (1,500 mm) in the higher elevations of the northern portion of the state to only 20–25 inches (510–640 mm) along the southeast coast of Connecticut (Branford to Groton). Generally, any locale north or west of Interstate 84 receives the most snow, during a storm, and throughout the season. Most of Connecticut has less than 60 days of snow cover. Snow usually falls from late November to late March in the northern part of the state, and from early December to mid-March in the southern and coastal parts of the state.