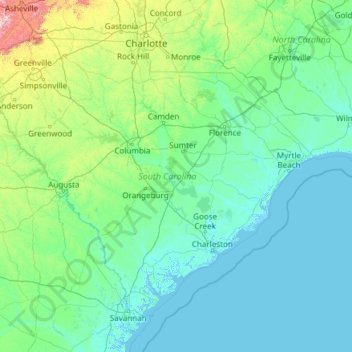 The Atlantic Coastal plain consists of sediments and sedimentary rocks that range in age from Cretaceous to Present. The terrain is relatively flat and the soil is composed predominantly of sand, silt, and clay. Areas with better drainage make excellent farmland, though some land is swampy. An unusual feature of the coastal plain is a large number of low-relief topographic depressions named Carolina bays. The bays tend to be oval, lining up in a northwest to southeast orientation. The eastern portion of the coastal plain contains many salt marshes and estuaries, as well as natural ports such as Georgetown and Charleston. The natural areas of the coastal plain are part of the Middle Atlantic coastal forests ecoregion.[51]