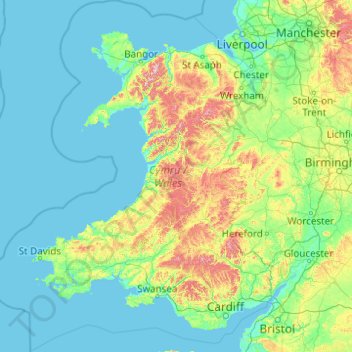 Much of Wales' diverse landscape is mountainous, particularly in the north and central regions. The mountains were shaped during the last ice age, the Devensian glaciation. The highest mountains in Wales are in Snowdonia (Eryri), of which five are over 1,000 m (3,300 ft). The highest of these is Snowdon (Yr Wyddfa), at 1,085 m (3,560 ft). The 14 Welsh mountains, or 15 if including Carnedd Gwenllian – often discounted because of its low topographic prominence – over 3,000 feet (910 metres) high are known collectively as the Welsh 3000s and are located in a small area in the north-west. The highest outside the 3000s is Aran Fawddwy, at 905 metres (2,969 feet), in the south of Snowdonia. The Brecon Beacons (Bannau Brycheiniog) are in the south (highest point Pen y Fan, at 886 metres (2,907 feet)), and are joined by the Cambrian Mountains in Mid Wales (highest point Pumlumon, at 752 metres (2,467 feet)).