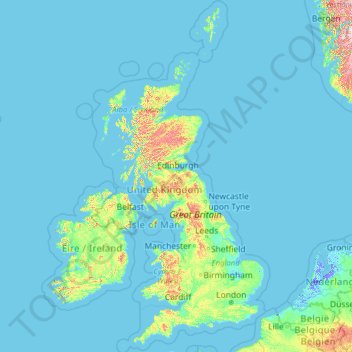 Scotland accounts for just under one-third (32 per cent) of the total area of the UK, covering 78,772 square kilometres (30,410 sq mi). This includes nearly 800 islands, predominantly west and north of the mainland; notably the Hebrides, Orkney Islands and Shetland Islands. Scotland is the most mountainous country in the UK and its topography is distinguished by the Highland Boundary Fault – a geological rock fracture – which traverses Scotland from Arran in the west to Stonehaven in the east. The fault separates two distinctively different regions; namely the Highlands to the north and west and the Lowlands to the south and east. The more rugged Highland region contains the majority of Scotland's mountainous land, including Ben Nevis which at 1,345 metres (4,413 ft) is the highest point in the British Isles. Lowland areas – especially the narrow waist of land between the Firth of Clyde and the Firth of Forth known as the Central Belt – are flatter and home to most of the population including Glasgow, Scotland's largest city, and Edinburgh, its capital and political centre, although upland and mountainous terrain lies within the Southern Uplands.